back to latest news 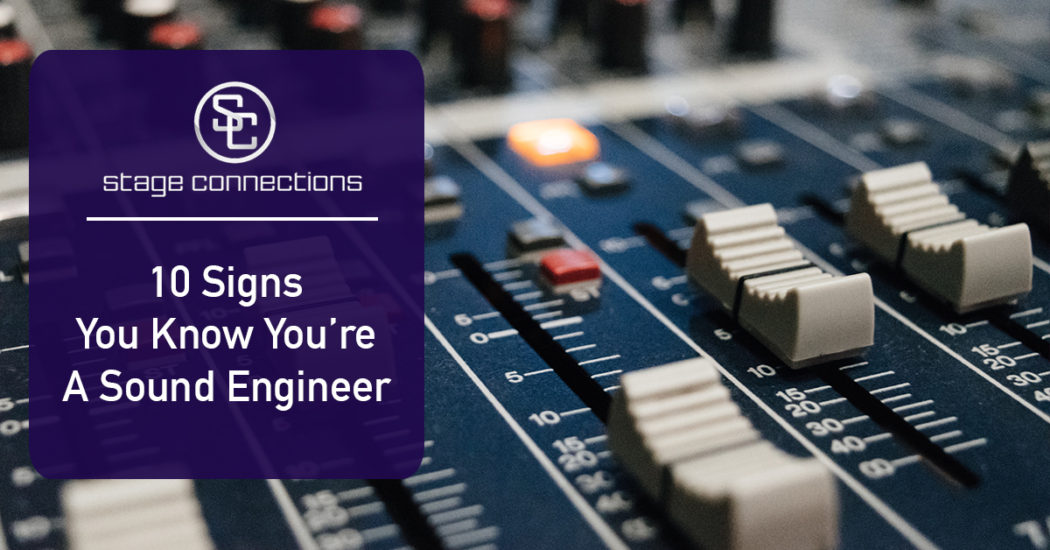 So you’re a sound engineer, which sounds kind of cool, right? Getting to go on tour with your favourite bands, meeting lead singers, cool guitarists and superstar DJ’s, getting invited to late night after parties, but, let us assure you the life isn’t quite as rock’n’roll as it may seem.

Here, we’ve summarised the top 10 signs you know you’re a sound engineer, to shed some insights into this often elusive career choice or hobby…

This, my friends, is not a cheap hobby. In fact, quite the opposite. If you’re into mixing your own music then not only will you spend your hard-earned cash on instruments, but also mixers, microphones and a whole host of other sound engineering equipment to practice your trade.

This doesn’t mean, however, that the more money you spend on expensive gear the better you will be at engineering a great sounding track or show. Amazing equipment in the wrong hands can still produce an awful sound, no matter how much money you throw at it, so make sure your equipment level matches your skill and experience level, and your wallet will thank you.

At many gigs, artists and bands are rushed off their feet rehearsing and trying to get everything sorted before the main event. One thing they so often forget to catch is your name. This means, you get referred to as ‘hey, sound guy’ on a more than regular basis.

This can be one of the most frustrating but relatable things for a sound guy. Even though you’re the one making the whole event sound awesome, it can feel like you’re overlooked by certain members of the team because it seems they don’t appreciate or have time for your hard work. To reverse this, try to be as confident and friendly as possible – if they don’t ask you’re name outright, give them the benefit of the doubt and introduce yourself. They’ll be sure to thank you later, when they know who’s name to shout in a sound-tech emergency.

3. You’re always travelling to the most glamorous of cities.

If you’re a more experienced sound engineer, you may well be familiar with New York, Paris, Miami, Milan. You name it, you’ve been. But, not always from the most enlightening or interesting perspective. Whilst normal people are out sightseeing, visiting tourist hotspots and soaking up the culture, you’re schedule is tight. It’s more “airport – tour bus – venue – repeat” than “eat – sleep – rave – repeat”, as you have little or no time to actually enjoy the city you’re gigging in.

Sitting behind the blacked-out windows of a tour bus to then spend 20 hours a day at the venue doesn’t sound like everyone’s idea of fun. But, you’re the sound guy, and the show must go on sounding its absolute best – so you get your head down, stay focused on the job and the crew are happy with another successful tour under their belt. Hard graft pays off!

Having an open mind and ears is a true skill, and as a professional audio engineer you must be able to willingly put personal tastes aside to focus on the technicalities and quality of sound you’re producing. Letting your own musical preferences slide can be annoying, but until your career hits a point where you can pick and chose, you have to get used to producing music you’re just not that into. And, put your name to it.

5. You’re often getting lost in the technicalities.

As an audio engineer with all the fancy tech involved, it’s very easy to get lost in the detail of perfecting sounds. However, if you’re also a musician, this can mean your craft takes a back seat whilst you focus solely on the technical side .

If you forget to practice your skills as a musical artist, you could be risking your future as a musician. Sounds can be mixed to perfection, but if the talent isn’t up to scratch, even the best-mixed tracks will sound awful. Our advice? Just make sure you know which path you want to take a stick to it, before you lose the skills to pursue your dreams of becoming a Rock Star.

6. You’re reminded on the regular that recording music isn’t sexy.

Let’s face it, the fans aren’t there to see you. Well, not whilst you’re Mr ‘Sound Guy’ anyway.   The lead singer’s obviously soak up most of the limelight, closely followed by other band members or other on-stage presences like backup singers, or other band members like guitarists, bassists and drummers. Pretty much everyone else involved in the production of the evening is more interesting and captivating than the sound engineer, even the worn out bar staff.

It’s 2am, in the club, and you’re sound booth is strategically placed to the side of the stage where you can do all your mixing in sight of those performing. Constantly getting mistaken for the DJ, these idiots seem to insist on coming up to you on an almost minute-by-minute basis to request some God-awful song that you wouldn’t even play even if you were the DJ. Now get lost and let me get on with my mixing!

This one doesn’t need much explanation: face it, you really are a big geek. Other hobbies may include, but not limited to; making genre-categorised playlists and mixtapes for your friends, playing video games and being able to tell what song is coming on the radio next having heard only the first fraction of a second. Epic. Skills.

9. You can’t remember what it’s like to go out on a Saturday night.

Being a sound engineer, you’ll know the hours are long and you’re always working weekends. These grueling hours can make it tricky to sustain ‘normal’ relationships, so getting time to hang out with close friends can be tricky, but that’s OK because…

As sad as this sounds, it’s true. When you finally do find time to take the night off and actually go enjoy some live music (rather than work at it all the time), you can’t ever truly relax. This is because you’re constantly assessing the sound from you’re keen, over-analytical and razor sharp hearing, which, let’s admit, you just can’t switch off. So you end up still listening and judging the whole gig from a soundie’s perspective anyway.

Our final advice? Go have a beer, it sounds like you really deserve it.

info@stageconnections.co.uk
Email Us Call Us